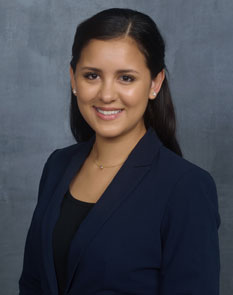 Stephany Alvarez is an Associate Attorney at Katine Nechman McLaurin LLP, where she focuses primarily in areas of family law. Stephany joined Katine Nechman McLaurin in 2015 as a law clerk during law school. She earned her Juris Doctorate degree from South Texas College of Law in May 2017. During law school, Stephany participated in the family law legal clinics where she learned practical skills while representing low income individuals through divorce proceedings. During her 2017 semester, Stephany received the Pamela E. George Family Law Award. She also received the CALI Excellence for the Future Award in Immigration Law. She is licensed to practice law in Texas.

Stephany was born in San Luis Potosi, Mexico and was raised in Houston, Texas. She is a fluent Spanish speaker. In her free time, Stephany and her fiancé enjoy running, traveling, and spending time with family and friends.